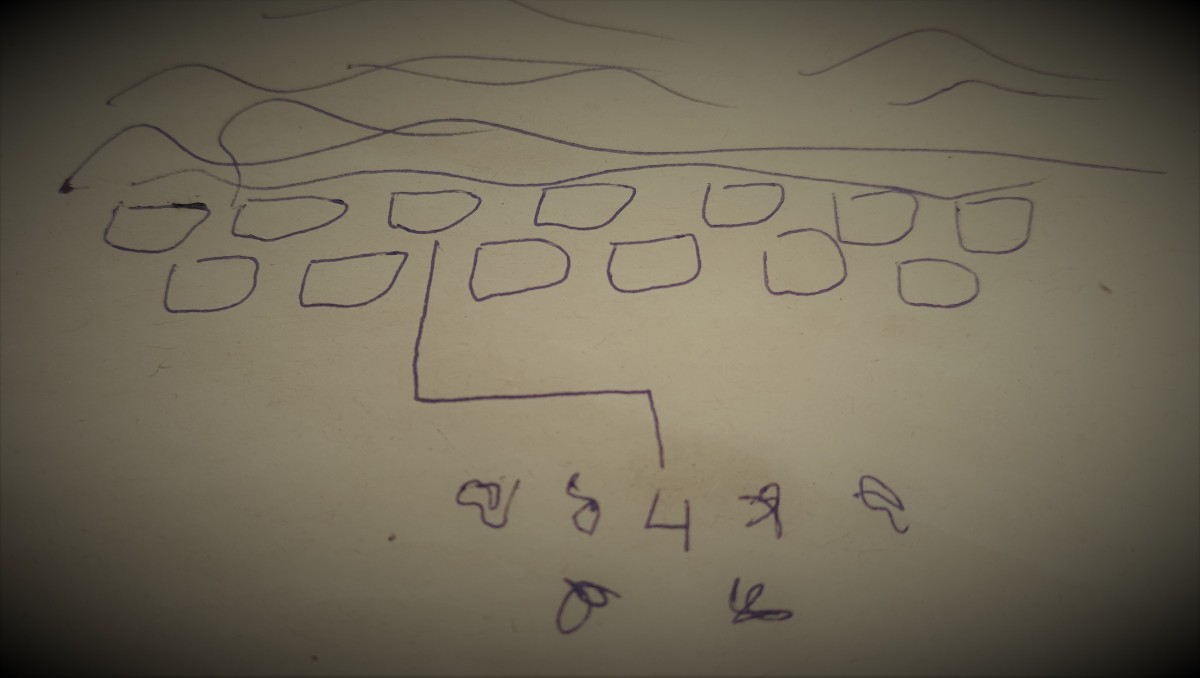 So I was invited to this lovely dinner with a group of people and my partner and good friend of mine were to, so that should be fun!

There were three tables. One for seven people, one for six people and one small table for 4 kids.

We were the first ones to arrive, so we could pick were we wanted to sit, but I figured that would sort itself so I talked to our hostess. She had organised a bicycle race a while back and I had taken part in it (definitely not won it). The person that had been the favourite to win it lost as well, because both she and I collided. I got disqualified, because of an illegal manoeuvre. There had been a lot of witnesses that told our hostess that I had pinned the favourite against a wall to stop her from winning, and in doing so it was said I had caused the collision between the both of us.

Somehow, there had not been time to discuss it back then, so we talked about it now. She was the one that told me I had pinned the favourite, but it was only at this dinner that I found out she had not seen this, but it had been told to her by witnesses of the crash.

Time to set the record straight. I had been behind the favourite, far enough not to collide but gaining. The moment I was close enough to pass without collision she pulled her bicycle to the left, right into me. I was able to keep my bike riding, but she fell and couldn’t finish the race.

Our hostess was shocked. The favourite had been the one that should have been expelled, nog me. She apologized profoundly. I told her it was oké.

While we were talking the room filled up with the other dinner guests. I had been squatting next to the chair of the hostess and it was time to find a place to sit. Only one place left. At the head of the table set for seven. (Seeing the room fill up awakened my anxiety for I didn’t know anyone other than my partner, my good friend and our hostess. It seemed I would end up getting seated with strangers, and I did). Another dinner guest that had taken a seat next to the one left for me started filling up my glass with water. He was having fun and getting laughs from everyone around him. There was already bread on the plates and the water started spilling onto my plate. I ran to my seat to see if I could control the damage ( I hate wet bread), but it was too late. I emptied my plate onto that of the man that was joking around. Both water and bread were for him, I wasn’t planning on eating/drinking it.

We were all having a good time. We talked, we laughed, dinner was wonderful. Slowly but surely I started piecing together that people that had wanted to tell the truth at the race had been ‘bullied’ into saying I had pinned the favourite of the race. When dinner was over we went into the village. It was a small village we don’t often visit, so it was nice to take time to walk around. Then people started to try and kill us! They didn’t like that the truth about the race came to light and wanted to make sure we knew. My partner and friend got caught and tied up. I got to where they were. Don’t ask me why, but somehow I had a gas burner on my key chain. One of those things you use for making desserts. I took it out and pointed it at the man that was guarding them. I set his hair on fire and he left screaming. I quickly untied the others. The place is swarming with people trying to kill us. We needed to get the hell out of there!

My partner figured out how. We needed to participate in race where we need to get to the top of some kind of tower, made out of nets, in order to get ‘flung out’ by being the first ones to reach top. Sort of like a video game. If you are the first to reach the top, you win or get to a second stage. That would be the way out of this village. My partner knew a cheat to get to the top of the tower first. We somehow dodged over twenty hitmen to get to the tower. This tower was build underground, but my partner knew we would be able to see the top from above ground, so we could jump on the top net. We got there, took the jump and indeed landed on the top net. Now we would have to hold on long enough to win. That wasn’t easy, because the whole tower swayed like crazy. Somehow we managed and won! Turned out that was not the end of the game, there was a next stage.

We started the next stage on our own in the streets. Normal streets, where people lived. We had been split up somehow. I didn’t know where the others were, so I ran for my life without knowing where to go, one of the hitmen hot on my tail. I somehow managed to take him out and started running again. My phone rang, the sound was that of the ringtone I have set for my partner, who is nowhere in sight. I see my friend straight ahead, running towards me. Suddenly my partner comes from my left telling us to get in a tree we are near at that point. We climbed tree. Several hitmen run past it without noticing us. A strange thing, because the tree has barren branches, but hé, don’t question good luck. One of the men that was trying to kill us somehow had wings and flied up to the tree. He tried to shoot us, but my friend somehow turned out to be an archer and had a bow and arrows. My friend shot two arrows to disarm the winged man and put a third through one of his wings. He fell to the ground and disappeared. The voice of a commentator (like those at sports events) announced to the spectators that the winged contestant was out of the game.

We needed to go on so we climbed out of the tree and ran to a house about ten paces to our right. We went through the door and closed it. Somehow the inside of the house looked more like a cave. There was this huge gate around the tower (this time it was made of stone and actually looked like a tower). I was the first one to walk through the gate. It  started to close and I tried to keep it open with all my might, so the other two would be able to get in with me. The got in just in time. With the gate closed we felt sort of safe, there was only this sort of cat flap to get through the gate now. At the base of the tower was a puzzle to solve. There were numbers that needed to be connected to right stones to get path across small body of water and go up. All of a sudden the head of a teacher peeks in from the top of the tower. He gave a hint to solving the puzzle. I could only wonder if we would walk into a classroom once we made it to the top. The man said that the numbers keep the same order. Great, now we could solve it, I hoped. One of the numbers, the number four, had a line that connected it to one of the stones. I looked around if I could see a way to get that number on the right stone and suddenly noticed chalk pens on the ground to my left. They were lying underneath a radiator. I picked up as many colours as I could, because the numbers have colours to and who knows, we might need them later on. I put first number on stone ‘connected’ stone. Writing the four on the stone proves difficult. (I don’t know if you have ever tried to put a number like 4 or seven into a handheld Nintendo? When I try to write it down the damn thing always takes about three tries to get the right number into the system.) Now  registers with difficulty, but gets there (like Gameboy). Now we had to figure out where the other numbers had to go. I asked my partner and my friend to stop joking around and start help me figure things out. We were still puzzling when I woke up.

I am still wondering wat would have been waiting for us at the top, I tried desperately to get back to sleep so I could finish the puzzle. Strange though…. I could actually see the number four. It was the only one, and with difficulty, but normally in dreams numbers and letters can’t be registered. That’s how you determine you are dreaming and how you can take over and start to have a lucid dream. Maybe that’s why I could only see the four and why it was so difficult to put it on the stone in a way you could make out it was a four. Dang it, that is going to hunt me all day. Well I hope you have enjoyed my dream. I sure did, even though it was quite a dangerous event.